How To Choose The Best Tennis Racquet

Choosing the best tennis racquet is not the easiest task, won’t you agree? With over dozens of high-quality brands and literally hundreds of models to pick from, you really need to know the factors to consider before making that choice. So if you’re on the lookout for a brand new glossy weapon to step onto the court with, this post should help you. Also knowing your stuff while talking to pushy salesmen won’t harm you as well 🙂

Racquets have come a long way since they were made out of solid wood and strings created out of animal intestine or catgut. They are now made out of a composite mix of carbon, fibre with strings of nylon and polyester. But technology is just one of the pieces of the puzzle, so let’s get started. 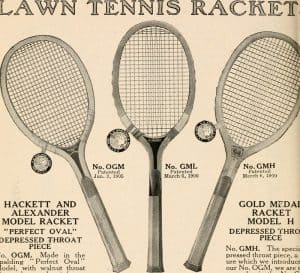 A good place to start before you start evaluating racquets is to do an honest self-assessment of your game. What are your skill levels? How often do you play? The USTA has published the set of guidelines for categorizing player skills and experience levels and it will be a useful reference. Here goes the chart. If you have trouble doing this assessment yourself, take the help of a coach.

If you’re a beginner and want to buy Djokovic’s racquet since he is your favorite player and the racquet looks stylish, it could leave you annoyed and frustrated and might even stunt your game development as you will be playing with a racquet not suited to you or ready for you yet. Conversely, if you’re an advanced player you wouldn’t find the maneuvering skills that you need if you go for a beginner’s racquet. That being said, there are three basic categorizations of racquets that closely correlate with the stage of talent.

Beginners Racquets
The focus of this type of racquets is to make up for the lack of power and precision that are generally associated with beginners. Also, they normally have a bigger head size with a wider sweet spot, which we’ll get in more detail soon. These attributes make the racquets to be termed as more forgiving.

Advanced Racquets
This type of racquets have superior directional skills, are suited to execute a wide range of strokes, relatively heavier with a smaller head and an even smaller sweet spot. As you can imagine, the priority is on getting maximum manipulation and maneuverability from the equipment.

Intermediate Racquets
This category, also fancily referred to as the Tweener category based on the skill levels, offers better capabilities, and make most of the player ability. Shorter with a smaller head and sweet spot, the emphasis is more towards manipulation potential as these kinds of players wouldn’t need as much assistance as a newbie.
That being covered, let’s dive a bit deeper into the specifications and some generally accepted standards.

Racquet Specifications
Weight: This is probably the most critical factor as far as the specifications go. You hit thousands of balls and if you’re using a racquet that’s even 5-10 ounces heavier, you’re working your way towards an injury. Further, your game may not be developed to use that racquet to its capabilities or your muscles may not be used to bear the heaviness. Conversely, a racquet that’s too light will hinder the progress of an advanced player.
The heavier racquet will normally generate more topspin; also it will have more trampoline effect and get inconsistent rebound and so you need to be a good player to control it. Hence going by conventional wisdom, heavier racquets suit advanced players and not so much for the beginners for whom a lighter racquet which has relatively less power and spin, but crisper and easier to swing will be more apt.

A sub specification of weight is the swingweight, which technically speaking is a measurement of the resistance of a racquet to being rotated about an axis through your hand. In more simple terms, it is the measure of how easy it is to swing and maneuver and is measured in kilogram centimeter squared or just plainly swingweight units.

Obviously, the lesser the swingweight, the easier it is to swing; moreover, it is easier to generate racquet head speed with it. On the other end of the scale, a high swingweight will lend more power & stability while intermediate falls somewhere in between. The modern racquets range between 280 and 350 in swingweight, with a high of 330 and above and a low of 310 and below.

Balance: Closely related to the weight is the balance which tells how the weight is distributed across the length of the racquet and can be classified as – head heavy (more weight is focused on the head area), head-light (weight is more towards the base of the racquet) and even (even distribution of weight). As you can imagine, head-light is easy to operate but has relatively lesser power than a head-heavy racquet. And for the same reason, head-heavy racquets suit the beginners and as you go up the skill and experience level, the head-light variety gains popularity
It is prudent to err on the lighter side of the weight since you can add weight to the racquet if needed (using lead tape for example), but you’ll be stuck with a heavy racquet with nothing much to do if it doesn’t suit you.

Head Size: Typically, the larger the head size and the sweet spot (the part where you get the most power and comfort from the racquet), the more forceful it will be. The range of head sizes available is between 80 to 130 sq. inches. The head size tends to be in proportion to the level of the player that it is built for.

The average head size for the different category of players are,

Length: Adult racquets vary from 27 to 29 inches (the max allowed in tournaments) in length. Longer racquets will obviously have more reach as well as get more leverage on serves. They tend to impart more power as well. The downside is more swing weight and so lesser control. Also for physically smaller players, shorter racquets would be better suited.

Frame Stiffness: The stiffness of the frame is often not given the due importance it deserves though it affects the power and control in a racquet. The stiffer the racquet, the more powerful it is but falls short in control and comfort. Moreover, it can lead to arm issues if persisted with since the racquet transfers the impact on contact to the arm instead of absorbing it. So it is normal to see advanced players opting for less stiff frames especially those who rely on precision and touch play in their strokes. The stiffness is measured on a scale from 0 to 100 and the majority of the racquets fall between the range of 50 to 80.

The choice of frame stiffness in advanced players indicates their style of play. For example, Federer would prefer a more flex (less stiff) racquet that suits his precision and touch play whereas Nadal who is a more physical player would prefer a stiffer racquet that will supplement his power-based game.

String Pattern: This simply tells you the number of strings that are woven across the length and breadth of the racquet head. There are multiple patterns available with the most popular being the 16 (top to bottom) x 19 (cross strings) and 18 x 20 ones. The string pattern influences spin and control to a fair extent, with fewer strings being more conducive to spin and the higher number of strings lending more control.

Grip Size: There is no hard science for the ideal grip size but a widely followed norm is that when you hold a racquet, there should be a width of a finger or a pencil between the fingers and the palm. Come to think of it, that is the only part of your racquet that you touch and so it needs to be proper and feel proper as it can have a major bearing on your performance.

Grommet: A quick word on grommet which you will find around the racquet’s head through the side of the frame, is meant to protect the strings. These are often used by advanced players but you need to keep in mind that anything you put on the racquet is going to add to its weight which to repeat is the single most important spec of your racquet.

String: The choice of string in a racquet is a prime factor and contributes to as much as 50% of the playability factor and is often referred to as the engine of the racquet. This has gained added significance with the advent of technology advances like polyester strings which took a while before it became popular due to its poor tension holding feature. What it does is to let you apply more topspin to balls while maintaining control.

Racquets come either as pre-strung, meaning the strings will be already applied to the racquet while unstrung lets you customize it as per your preference. Advanced players generally choose the strings and the tension to suit their playing style, while this isn’t prevalent among the lesser players and so if you aren’t a pro who knows your game inside out, it is wise to get started with the strings that are already in place which will be as per the normal standards anyway.

Specifications – Skills Table
Here is a quick table for easy reference of the technical specifications to skills mapping. In spite of the risk of sounding repetitive, these are not hard and fast rules and so personal preference and style of play a big part in the choice and suitability of the specifications for players of any kind.

Buyers Checklist
Now that we have covered the skill level, playing styles, and the detailed specifications that goes into making a decision on the choice of the racquet, here’s a quick checklist for your consideration before you decide on what to buy.

Read Reviews: Do read a lot of reviews about racquets which does a fair evaluation based on a comprehensive set of criteria that includes the level of skills and experience, game style and technology.

Take Marketing with a Pinch of Salt: Resist the temptation of being swayed unreasonably by the marketing gigs and your idols who may be endorsing them. It’s about you and not your idol. A racquet that promises heavy topspin doesn’t mean that you can play it unless you have the stroke to begin with.

Request Racquet Demos: Check the look and feel and try it for a while before committing to buy. A lot of the good suppliers have demo program where they will let you experiment with the racquet for a limited period of time for a nominal cost – normally 90 days for $40.
As a final word, remember that technology and tools should be an amplifier of the good old traits of hard work, patience, and constant learning. No technology or choice of a racquet can be a substitute for that.

We’e a participant in the Amazon Services LLC Associates Program, an affiliate advertising program whereby we earn fees by linking to Amazon.com and affiliated sites.